meeting
10 mei 2022
The SCAPE partners were finally able to meet and visit the Brighton urban pilot and the Kent rural pilot. We are very happy to see the wonderful results of years of work with SCAPE.

Two totally different sites were realised. The urban pilot in Brighton prevents the flooding of houses downhill and brings a biodivers change to the look and feel of the street. The rural landscape of Kent were made accessible and flood prevention measures were installed.

The Carden Avenue pilot project is located in the upper part of a dry valley of Brighton that was developed in the 20th century. It is a low density, low rise mainly residential area of the city.

Carden Avenue is a long road flanked by grass verges. First the Darcy Drive triangle at the lower end of the pilot site had been completed. A raised table at the northern entrance to Darcey Drive from Carden Avenue has been introduced to direct surface water flow from the road into the drainage system of swales and shallow basins. The first basin contains a liner that retains pollution from the road surface. Cleaner water then flows into a second basin and infiltrates into the chalk and the aquifer below. This two-basin system is repeated in a cascade-like Landscape Led Design. Small solutions to large problems manner along a sequence of verges at top end of the pilot site. The idea is to mimic natural systems in which gravity and landform are used to remove as much excess water flow as early as possible to reduce the risk of flooding to affected properties. 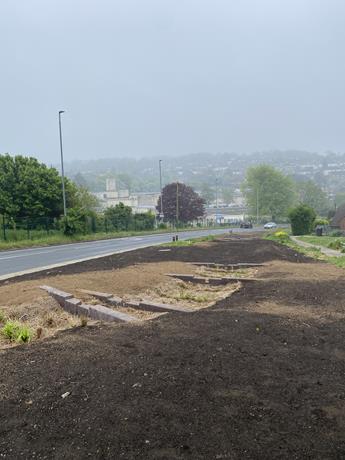 The Darent Valley is a rural landscape that forms part of the Kent Downs Area of Outstanding Natural Beauty just outside London. Five percent of the UK’s population lives within 10 miles of the valley. Conservation and management of this important area is a question of striking a fine balance between conflicting wishes and needs.